Thank you all for your wonderful suggestions for Name the Square Contest. After much thought, my husband and I have chosen the winning name(yes, I asked for my husband's advice as he is the resident knitter – see previous posts). We have chosen “Remember Me” - named after the “Flower of Remembrance,” the red poppy, which is the official memorial flower of the VFW. The person who nominated the winning name is an anonymous Canadian who found me from Ravelry, so I cant' properly thank her. However, if she makes herself known I surely will. She said that her first thought was that the red flower in the middle reminds her of the poppies they wear in November in Canada. So here you have the new 12” square. I hope you enjoy it and I appreciate everyone's participation. Hope you had fun! But first here's a little history lesson behind the red poppy.


In Flanders fields the poppies blow
Between the crosses, row on row,
That mark our place; and in the sky
The larks, still bravely singing, fly.
Scarce heard amid the guns below.


We are the dead. Short days ago
We lived, felt dawn, saw sunset glow,
Loved, and were loved, and now we lie
In Flanders fields.


Take up our quarrel with the foe:
To you from failing hands we throw
The torch; be yours to hold it high.
If ye break faith with us who die
We shall not sleep, though poppies grow
In Flanders fields.


This was the poem written by World War I Colonel John McCrae, a surgeon with Canada's First Brigade Artillery. It expressed McCrae's grief over the "row on row" of graves of soldiers who had died on Flanders' battlefields, located in a region of western Belgium and northern France. The poem presented a striking image of the bright red flowers blooming among the rows of white crosses and became a rallying cry to all who fought in the First World War. The first printed version of it reportedly was in December 1915, in the British magazine Punch.


McCrae's poem had a huge impact on two women, Anna E. Guerin of France and Georgia native Moina Michael. Both worked hard to initiate the sale of artificial poppies to help orphans and others left destitute by the war. By 1920, when Guerin, with the help of the American Legion, established the first poppy sale in the U.S., the flower was well known in the allied countries — America, Britain, France, Canada, Australia and New Zealand — as the "Flower of Remembrance." Proceeds from that first sale went to the American and French Children's League.


Guerin had troubles with the distribution of the poppies in early 1922 and sought out Michael for help. Michael had started a smaller-scaled Poppy Day during a YMCA conference she was attending in New York and wanted to use the poppies as a symbol of remembrance of the war. Guerin, called the "Poppy Lady of France" in her homeland, and Michael, later dubbed "The Poppy Princess" by the Georgia legislature, went to the Veterans of Foreign Wars (VFW) for help.


The poppy was adopted as the official memorial flower of the VFW at its national convention in Seattle, Wash., in August 1922, following the first nationwide distribution of poppies ever conducted by any veterans organization.


In 1923, faced by a shortage of poppies from French manufacturers, the VFW relied on New York florists to make up the difference. This was a huge setback, however, and led to the idea by VFW officials to use unemployed and disabled veterans to produce the artificial flower. This concept was approved in late 1923 and the first poppy factory was built in Pittsburgh, Pa., in 1924. This provided a practical means of assistance to veterans and also ensured a steady, reliable source of poppies. Veterans at Department of Veterans Affairs medical facilities and veterans homes help assemble the poppies, and each year the VFW distributes roughly 14 million worldwide.


It was around the same time the first poppy factory was built that the VFW registered the name "Buddy Poppy" with the U.S. Patent Office. The term "Buddy" was coined by the poppy makers as a tribute to their comrades who did not come home from the war or who were scarred and crippled for life.


The VFW celebrated the 75th anniversary of the Buddy Poppy as its official flower in 1997. While profits from its sales have helped countless veterans and their widows, widowers and orphans over the years, the poppy itself survives as a perpetual tribute to those who have given their lives for the nation's freedom. 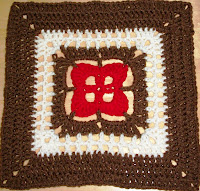 
Copyright - This Remember Me Pattern and the pattern photos are copyright 2010 by Melinda Miller. Free for your own personal use only. Per copyright law, do not redistribute (with or without charge) in any form. (Redistributing to others includes by photocopies, scanning, emailing, putting on a CD, posting in Internet forum messages, putting on another web site and any other manner of distribution.)


This pattern is named after the “Flower of Remembrance,” the red poppy, which is the official memorial flower of the VFW.

Email ThisBlogThis!Share to TwitterShare to FacebookShare to Pinterest
Labels: Pattern

Promote Your Page Too